Warning: count(): Parameter must be an array or an object that implements Countable in /home/mickelch/public_html/stuart/wp-content/plugins/social-autho-bio/social_author_bio.php on line 68
 High energy Germans | Interesting Organic Chemistry and Natural Products.

Along with the group at the University of Rostock there appears to be another cluster led by Prof Klapötke etal in Münich investigating what they call “high-energy dense materials (HEDM)” which is the scientific nomenclature for explosive! Well noted is the statement “The challenge is based on the combination of the three main demands 1) performance, 2) safety, and 3) practicability“. I don’t think I am brave enough to don the “….. Kevlar gloves, Kevlar sleeves, face shield, leather coat, and ear plugs ” but judging from the group’s photograph they all seem to be ok, even the dog. I wonder if they have the kevlar equipment for it? Well just what are these compounds? How about nitraminofurazanes? For example : 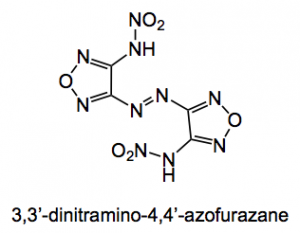 This compound has three times as much nitrogen as carbon (48.95% N, 16.79% C). It is prepared, carefully, by nitration of the corresponding parent heterocycle in good yield. The parent compound itself can be obtained from glyoxal in several steps.

This compound demonstrates imposing explosive properties but is thermally less stable than RDX (which has a lower N/C ratio). It decomposes at 122°C, has a detonation velocity of >9000 m sec-1 and a detonation pressure of  >400 mbar and is very sensitive towards friction and impact.  Now that is imposing.

The group also made salts of these compounds for example with hydrazine, hydroxylamine, 5-aminotetrazole and the like, increasing the %N even more, up to 56% for the bis-hydrazine derivative. NMR and X-ray data are also presented for all the compounds reported as are tox data and of course the explosive properties.

Well this is some piece of work, well done to the group at Münich. Rather you than me.