Warning: count(): Parameter must be an array or an object that implements Countable in /home/mickelch/public_html/stuart/wp-content/plugins/social-autho-bio/social_author_bio.php on line 68
 Fungal metabolites | Interesting Organic Chemistry and Natural Products.

I see the University of Wisconsin-Madison has been very busy of late, a group led by Prof. Bugni reported the isolation and identification of a new anti-fungal polyketide, Forazoline A: 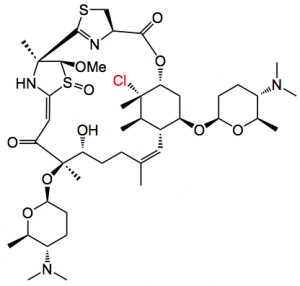 So what you might say? Well this is an in vivo active anti-fungal with a novel mechanism of action. Fungal infection accounts for many deaths annually. One particularly nasty fungus and of course the most common is Candida albicans. This causes various infections, including candidiasis, which affects about 400,000 people per year, with an very high mortality rate of between 46 and 75%, a fact that I was not aware of.

This compound was identified from a LCMS screen of bacteria associated with marine invertebrates in conjunction with disc diffusion bio-assays. This strategy, called metabolomics, has been particularly successful in identifying novel natural products in that the process is streamlined and very efficient. This compound was isolated from the fermentation of an Actinomadura which produces the WMMN-499 strain.

The structural assignment was very difficult, as one can imagine and the authors utilised various methods to achieve it. For example fermentation of the bacterium with 13C- labelled glucose allowed 13C-13C  gCOSY measurements to determine the carbon connectivity. Only 7 mg of forazoline A was required and the NMR experiment was complete in 30 minutes and allowed complete assignment of the carbon backbone. Fermentation with 15N labelled ammonium chloride in the 13C-labelled glucose medium allowed the NMR correlation of the carbon-nitrogen connectivity. NOSEY and ROSEY experiments were successful in assiging the configuration of the new compound. Using a KBr enriched fermentation system allowed precise location of the chlorine atom. Interestingly IR was used to confirm the presence of the sulfoxide.

Both forazoline A and the corresponding bromo compound, forazoline B showed an in vitro  MIC of 16 μg mL-1 . The compound is reasonably water soluble, although 5 mg per liter is not particularly high in my book, however I defer to the more experienced authors for their assessment of this parameter. Genomic profiling, which I have absolutely no clue about, allowed the authors to suggest a novel mechanism of action. This compound also showed a synergy with amphotericin suggesting a similar mode of action.

To summarise in the author’s words” The compound 1, a complex, novel natural product from a marine-derived Actinomadura sp., represents a new class of antifungal natural products and demonstrated in vivo efficacy comparable to that of ampho-tericin B in a mouse model of C. albicans and no toxicity. Additionally, combination treatment of 1 and amphotericin B demonstrated a synergistic effect in vitro. A chemical genomic approach suggested that it affects cell membranes, possibly through disregulation of phospholipid homeostasis.” All we need now is a total synthesis and a med. chem. study to identify simpler analogues, any takers?

A monumental piece of work here and congratulations to all involved.