Warning: count(): Parameter must be an array or an object that implements Countable in /home/mickelch/public_html/stuart/wp-content/plugins/social-autho-bio/social_author_bio.php on line 68
 Publication of the week, number 42, 12th September 2014 | Interesting Organic Chemistry and Natural Products.

Ever wondered what we could do with all the carbon dioxide in the atmosphere? Well here is a use for it, making derivatives of maleic anhydride.

It was reported this week by Sakaki and Tsuji and co-workers from Kyoto University. The cat. in the above is 10 mol% Ni(acac)2(bpy). The additives are (based on the amount of Ni catalyst); 3 equivalents of zinc metal, 2 or 3 equivalents of anhydrous magnesium bromide depending upon which bit of the paper you are reading and molecular sieves, 3A a pinch (100mg for 0.05 mmol of nickel catalyst). Mix this lot together in DMF under an atmosphere of CO2 for 20 hours at rt and work-up with 6M HCl and out pops the maleic anhydride in 71% isolated yield. Some of the ester below is formed (after treatment with TMS-diazomethane), around 2%. Note; some of the few isolated compounds, the rest are GC yields:

In a table you can see that these additives are required I wonder how they stumbled across this! Using magnesium chloride gave a 1:1 mixture of the maleic anhydride and the ester in low yield. No zinc no yield. Zinc halides instead of magnesium ones no yield. Other ligands attached to nickel, no yield. The reaction will tolerate several kinds of substituted acetylene. Again here the scope discussed is limited to alkyl and alkenyl substituted acetylenes with one example of an aromatic ring present in the molecule. Unfortunately, terminal alkynes and aromatic internal alkynes, presumably like diphenyl acetylene, did not afford the corresponding double carboxylated products.

The authors proposed a mechanism based on experimental results and some DFT calculations and invoked the cyclic nickel compound  below. 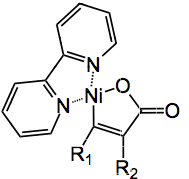 But what about all that zinc and the magnesium bromide? What are they doing? It is suggested that the active catalyst is actually Ni0(bpy) formed by the reduction of the Ni(II) precursor by zinc. A further reduction of the nickel compound with zinc and magnesium bromide followed by facile CO2 addition produces the next intermediate which is reduced by zinc to give the di-acid salt below:

where M is either MgBr or ZnBr. This neatly accounts for the 3 equivalents of zinc and the requirement for magnesium bromide.

According to the supplementary material a glove box is requited along with standard Schlenk techniques for this reaction to be successful. This may limit its applicability to the large scale utilisation of carbon dioxide. But that doesn’t matter because you are left with toxic heavy metal residues to dispose of, well I suppose they are just sealed in glass and buried. However look on the bright side you have reduced the amount of carbon dioxide in the atmosphere.

Here is another niche reaction which will no doubt be confined to the dust of the chemistry archives.