Warning: count(): Parameter must be an array or an object that implements Countable in /home/mickelch/public_html/stuart/wp-content/plugins/social-autho-bio/social_author_bio.php on line 68
 Publication of the week, number 43, 19th September 2014 | Interesting Organic Chemistry and Natural Products.

This week’s contribution comes from “Down Under” and discusses the isolation of some new cyclic peptides. It was reported by Capon etal from the University of Queensland. Amongst the compounds they obtained from a soil sample were Wollamide A and B. 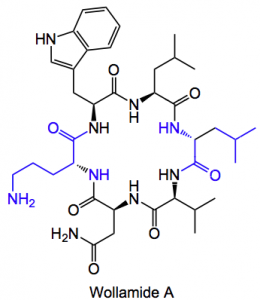 In blue are two D amino acids an ornothine and a leucine. They were isolated from a Streptomyces found in a soil sample at Wollogorang Station, Queensland. Additionally the related cyclic peptides desotamides A and B were also found in the sample. Isolation and structure elucidation were carried out using the normal methods employed these days, LC/MS, NMR, etc.

So what’s interesting about these peptides? Well again it delves into the problem of these nasty bacteria resisting the current set of compounds, so everyone is on the look out for new effective anti-bacterials. In this case the treatment of tuberculosis. In recent times the re-discovery of known natural products has led to some potential new approaches for tuberculosis treatment and this one is one of these re-discovery events.

The compounds showed significant growth inhibition of Bacillus subtilis with an IC50 of 2 – 10 μM with wollamide B inhibiting Staphylococcus aureus at around 1 μM. The wollamides also inhibited M. bovis, Bacille Calmette Guerin (see link for more info. M. Bovis ) with IC50 values of 2.8 and 3.1 μM. Now the related desotamides were inactive in this system. The only structural difference is the replacement of the achiral amino acid (Gly) in the desotamide cyclic hexapeptide scaffold with a basic D-amino acid (D-Orn). This causes the antibacterial profile to be extended to include mycobacteria, which are amongst the most difficult to dispose of!

So once again here is a chance for a synthetic chemist to start a SAR program to produce novel and perhaps simpler wollamide analogues to produce new drugs against tuberculosis. So get working folks.