Warning: count(): Parameter must be an array or an object that implements Countable in /home/mickelch/public_html/stuart/wp-content/plugins/social-autho-bio/social_author_bio.php on line 68
 Publication of the week, number 82, 19th June 2015 | Interesting Organic Chemistry and Natural Products.

This week we are going with the flow, Ley has published a paper with the intriguing title of “Machines vs Malaria…..”. Here he discusses the synthesis of a potential novel anti-malarial OZ439 by combining a flow based approach with traditional batch process.

This compound provides a single oral dose and seems to eliminate the malaria parasite in humans. It is now in phase IIa studies. In common with artemisinin it has a di-oxygen bond. Apparently the synthesis employs large amounts of pentane, which has been branded as an undesirable by some “green chemists” as has hexane. Pentane I can understand, but hexane is also on the list, interestingly not heptane! But I suppose 1 carbon can make the difference between toxic and non-toxic.

So a simple set of disconnections starting with the corresponding amide of OZ439 led to the following intermediates: 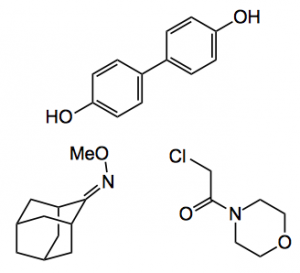 Starting with the selective reduction of the bis-phenol, Ley had already a flow machine installed for this reaction, gas/liquid heterogeneous catalysis. So all they had to do was optimise the reaction conditions to produce the ketone:

I say “all they had to do”, well it is not trivial and still requires careful experimentation. But the people and the machine were equal to the task! So “Under the optimized conditions, a solution of bis-phenol in EtOH/H2O (1:1 v/v, 0.05 M) was passed through a packed bed reactor (3 mL internal volume) containing the heterogeneous catalyst (Pd/C, 20 mol %) at 1.00 mL min-1, feeding the reactor with 0.1 L min-1 of H2 , while keeping the pressure of the whole system at 5 bar. With this protocol, we were able to quickly isolate pure material in an appreciable yield of 58% after recrystallisation from the reaction mixture (>95% purity as determined by NMR). By simply extending the reaction run time, we successfully delivered around 2 g of the ketone in 5 h, with this reactor setup. This result clearly highlights the advantages of continuous processing compared to the batch protocol“.

After acetylation of the phenol (also in a flow system) the preparation of the1,2,4-trioxolane ring system was examined. This has been reported by Griesbaum who did a co-ozonolysis reaction of ketones and alkyl oximes. Now batch ozonolysis is fraught with problems, the not least of which is the ozone generation! Flow systems have the capacity to eliminate most of the issues. Using a model system they optimised the flow conditions and ended up with a relatively dilute reaction system in order to avoid blockage and were able to produce the 1,2,4-trioxolane in 70% yield corresponding to a production of 45 grams per day of this interesting product: 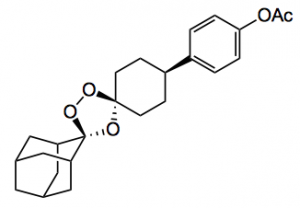 So cleavage of the acetyl group and coupling with 4-(chloroacetyl)morpholine produced the amide derivative of OZ439.

Now amide reduction was examined. Care is required here as the 1,2,4-trioxolane is sensitive to reduction. However, using zinc acetate (10 mol%) and triethoxysilane in THF/dichloromethane (1:1) at 60°C for 24 hours gave a 86% yield of OZ439. Note that dichloromethane replaces pentane as an undesirable solvent in this reaction!

So some nice chemistry here elegantly solved by using a flow reactor system. While we are on the topic Kappe recently published an excellent review of the tricky (thermally challenged) reactions currently in the literature that have been carried out in flow systems. This is well worth reading.

So break out your pumps and tubes and microreactors, couple them to Fujita’s crystalline sponge x-ray press the start button and sit back and write the next paper for Nature.