Warning: count(): Parameter must be an array or an object that implements Countable in /home/mickelch/public_html/stuart/wp-content/plugins/social-autho-bio/social_author_bio.php on line 68
 Antibiotics | Interesting Organic Chemistry and Natural Products. | Page 2

I see the Gademann group are still attacking interesting synthetic targets, this time no claims of a robust gram scale synthesis but a nice enantioselective total synthesis of fidaxomicin (continuing from their previous paper in which the aglycone was synthesised). The compound has interesting anti-bacterial activity and inhibits RNA polymerase in bacteria. It shows high activity against drug resistant strains of Mycobacterium tuberculosis and was FDA-approved in 2011 for the treatment of Clostridium difficile infections involved in nosocomial  diarrhoea. However, its low bioavailability after oral application prohibits its use as a therapeutic against systemic diseases such as TB. 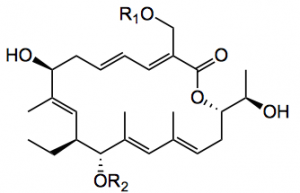 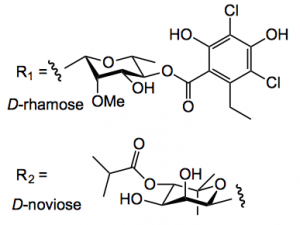 I knew about rhamose, but noviose is a new sugar to me.

Basically the synthesis of the macrocyclic lactone employed the same chemistry as previously described, a Stille coupling being replaced by a Suzuki for construction of the diene unit. Again I won’t go through the entire synthesis which has many highlights, but pick out the bits that I found and liked.

Ring expansions/contractions/rearrangements are always interesting and usually synthetically useful reactions. So Gademann dredged up a reaction from the depths of Helv. Chimica. Acta from 1979, a Vasella ring contraction:

Reagents here are zinc, ammonium chloride, methanol at 60°C and gives 91% yield of product. This was converted in a further 6 steps to a glycosyl bromide and the coupling with the agylcone, however, “the β-noviosylation on the complete macrolide proved exceptionally challenging. Tedious experimentation using different glycosidation methods consistently resulted only in α-selective glycosylation on the protected macrolide.” So a Master of understatement here! So back they went to an advanced intermediate from the aglycone synthesis and finally found conditions which worked: 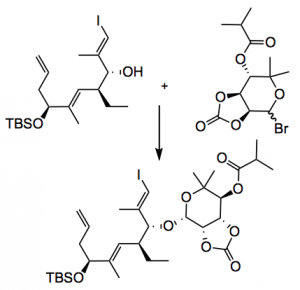 Conditions: HgO, HgBr2, 4Å sieve, DCM, 63% yield, α:β 1:3. Note the ring has suddenly expanded again in this sequence! “glycosylation with the sterically demanding, yet more flexible secondary alcohol, using Helferich’s conditions, furnished the noviosylated fragment with a good α/β ratio (63%, α/β = 1:3, 48% of β-anomer isolated). The relative configuration of the β-glycosidic linkage was assigned by NMR studies (NOESY). To the best of our knowledge, this experiment constitutes the first example of a β-selective noviosylation that has been reported in the literature.”

It is amazing just what these sugar units can tolerate. Further steps included a Suzuki coupling under basic, if somewhat toxic, conditions (TlOEt), Grubbs (II) metathesis, 100°C and an equlibration of the Z isomer under similar conditions, HF/triethylamine, TMSOTf. Through all this the ester and the carbonate survived. Interestingly the carbonate cleavage was troublesome due to competing ester hydrolysis, however, Barton’s base (wet) proved to be the winner. However, the yield for the final deprotection steps was only 0.6%.

As usual you can’t really do this amount of work justification in such a few words. The paper is packed full of information and is open access (author’s choice), I appreciate the choice. So congratulations to Gademann and his group on a very nice total synthesis.