Warning: count(): Parameter must be an array or an object that implements Countable in /home/mickelch/public_html/stuart/wp-content/plugins/social-autho-bio/social_author_bio.php on line 68
 Diels-Alder reaction | Interesting Organic Chemistry and Natural Products. | Page 2

Spotted fleetingly last week was a publication by Danheiser in JACS detailing the preparation  and reactions of the strained cyclic ynamide:

Now this is an unusual compound, just think what you can do with the chemistry of arynes. Of course it is not as stable as the aromatic variant which makes its synthesis and chemistry all the more interesting.

So how is it made? Well according to the authors it was first obtained some time ago by FVP of an isoxazolone at around 700°C. This being a rather adventurous route a more gentle method was chosen:- 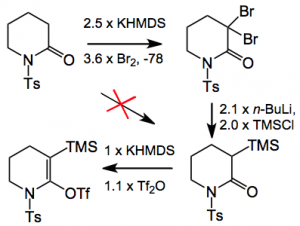 The overall yield to the enol triflate was around 38%. Direct formation of the TMS lactam was not viable. In the route above attempted mono-bromination was not successful however the di-bromide was nicely crystalline. Generation of the ynamide from the enol triflate is easily carried out by elimination using KF/18-c-6 or CsF in acetonitrile at RT and when done in the presence of a trapping agent, 2,5-dimethylfuran the Diels-Alder product was obtained in high yield (structure confirmed by x-ray):

Dilute solutions are important for the success of the elimination reaction, 50 mmol in acetonitrile. Two equivalents of the fluoride source are also optimal.

A whole range of trapping agents can be used, azides, diazo compounds, nucleophiles and so on. The addition of nucleophiles is very regioselective, thiophenol producing the following compound:

Thus a similar spectrum of reactivity to the arynes was observed.

So here we have a nice new way of producing novel nitrogen heterocycles which are difficult to obtain using more conventional methods. I look forward to reading of further applications of this chemistry.