Warning: count(): Parameter must be an array or an object that implements Countable in /home/mickelch/public_html/stuart/wp-content/plugins/social-autho-bio/social_author_bio.php on line 68
 Peptide synthesis | Interesting Organic Chemistry and Natural Products.

Some peptide chemistry and a few good classical reactions combine in this week’s ASAP from the Cuny group at the University of Houston who synthesised the disulfide-containing cyclic peptide thiochondrilline C. 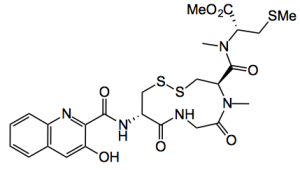 It is a marine-derived natural product recently isolated from Verrucisispora sp., and has been reported to demonstrate moderate cytotoxicity (EC50 = 2.9 μM) against human A549 lung adenocarcinoma cells.

The synthetic route, I think, is obvious and leads to 3-hydroxyquinoline-2-carboxylic acid and a cysteine derivative-

So starting from O-nitrobenzaldehyde Fe/HCl reduction gives O-aminobenzaldehyde in 87% yield. Formation of the 3-amino quinoline carboxylate is achieved in 90% yield after reaction with ethyl bromopyruvate and ring closure. A Sandmeyer reaction follows to produce the 3-hydroxy quinoline system, 68% yield. Great experimental description here “…… (864 mg, 4.0 mmol) was added to 3 mL of 40% sulfuric acid at room temperature, and then 3 g of ice was added. The mixture was stirred for 5 min to form a homogeneous paste. The slurry was cooled to 0−5 °C, and then a cold solution of NaNO2 (304 mg, 4.4 mmol) in 1 mL of water was added dropwise. The reaction mixture was stirred for 15 min and then added to a boiling solution of 50% sulfuric acid (20 mL) dropwise. After the addition, the solution was boiled for 10 min and poured into ice−water. The reaction mixture was neutralized with saturated aqueous NaHCO3 and extracted with ethyl acetate. The organic layer was washed with brine, dried over anhydrous Na2SO4, filtered, and concentrated …….”. So from a freezing mixture (which very nearly cracked the enamel on one of my larger stirrers) to a boiling mixture (about 120°C). So why not 40 or 50% acid all the way through? Imagine the quantities of bicarbonate needed to neutralise that lot. It may have been easier to just do the next step, ester hydrolysis, by adding conc. NaOH.

The cysteine bit were assembled using conventional chemistry and a STrt to SMe swap. This involved removal of the Trt with triisopropylsilane (Boc also falls off here) selective S-methylation, Boc protection and thionyl chloride/methanol to give

Interestingly the only way to couple this acid and the N,S-dimethyl cysteine to give thiochondrilline C was propylphosphonic anhydride. If one employed more “normal” amines such as (S)-1-phenylethylamine or even N-Me-L-Ala-OMe then EDC/HOAt could be used. So a useful piece of information here for anyone attempting such chemistry.

So here is a way to do some productive med. chem. on this molecular system, at least at one end. Another paper full of useful info. and some conventional chemistry, a refreshing change from the 9999th transition metal-ligand catalysed reaction.