Warning: count(): Parameter must be an array or an object that implements Countable in /home/mickelch/public_html/stuart/wp-content/plugins/social-autho-bio/social_author_bio.php on line 68
 Paper of the year 2014: Crystalline Sponge X-Ray | Interesting Organic Chemistry and Natural Products. 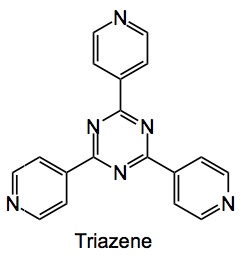 with zinc iodide in nitrobenzene methanol mixtures. Single crystals of the MOF grow on the glass of a test tube at the solution layer boundary and look like this: 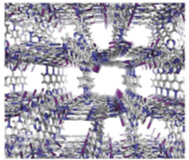 Initially the pores are filled with nitrobenzene and this needs to be replaced with a non-coordinating solvent such as cyclohexane before the compound to be analysed can be introduced. This is done by simply soaking the MOF in cyclohexane with regular exchange for fresh solvent over the period of about a week. You obtain 3 types of crystal the best one to use is the rod-shaped crystal, which can be separated from the others by using a micropipette. They can be stored in cyclohexane for several months without degradation.

Now comes the time to add your guest compound. Using a saturated solution the guest is introduced to the MOF by slow evaporation favouring good diffusion into the pores . The progress of the diffusion is monitored by changes in the IR spectrum. Solvents are a bit limited here, cyclohexane being the optimal but small amounts of halogenated solvents can be employed as co-solvents. The micro-crystals can now be observed within the MOF unit cell by standard x-ray methodology. Recommended are synchrotron generated x-rays.

Since this was published I have seen three papers reporting the use of this methodology: one by Buchwald etal where it was used to reassign the structure of a hypervalent iodine reagent, for trifluorothiomethylation, from the benziodoxole structure to the open form shown below : 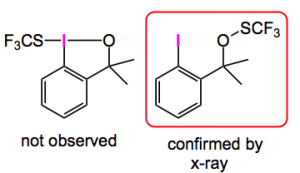 The other example I have seen is one from the Baran group, together with Prof. Fujita, where it was utilised to confirm the products of electrochemical C-H activation, for example the product of trifluoromethylation of the corresponding pyrrole:

Finally the third application was one by Fujita himself where it was used to observe the palladium catalysed bromination of an aromatic compound with NBS taking place within the pores of the MOF! One of the intermediates seen was this compound, obtained after washing the RM with acetonitrile: 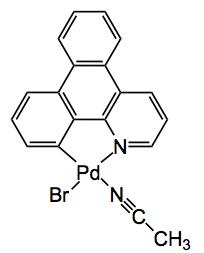 In a very elegant piece of work Fujita was able to follow the course of this reaction by x-ray crystallography. He observed a series of intermediates along the reaction pathway, in a time lapse sense. This sure beats TLC!!

While I was writing this a post appeared here. Apparently this method is being actively pursued to iron out the cracks as shown by this very recent paper. For example the procedure for the synthesis of the zinc based MOF used  has been modified to yield crystals in 3 days instead of 2 weeks, quite a difference there. Other modifications are also in progress and presented in this paper.

Finally from Prof. Fujita “…. we successfully demonstrated the X-ray analysis of guaiazulene, a natural aromatic hydrocarbon, using an 80-ng sample and a standard laboratory X-ray machine. The nanogram-to- microgram scale X-ray measurement also enables researchers to implement a practical combination of HPLC separation and X-ray crystallographic analysis, known as liquid chromatography–SCD (LC-SCD). Furthermore, the absolute configuration of chiral compounds can be determined from the anomalous scattering effect of heavy atoms embedded in the framework of the crystalline sponges. Considering the importance of X-ray crystallography in structure analysis, the crystalline sponge technique is a major advance, and we expect it to be widely adopted in academic and industrial research.“

I agree with this statement entirely. Think about it, a single crystal x-ray of the compounds in your analytical HPLC separation. Couple this with the recently described MS/NMR methodology and you have a complete analysis of all the compounds produced by your reaction, including intermediates! This sponge x-ray method really advances the science of chemistry, not just organic but across the board. It is a wonderful tool and I hope it really takes off and becomes a part of everyday lab life.

Congratulations to Prof. Fujita and his group for providing this methodology.