Warning: count(): Parameter must be an array or an object that implements Countable in /home/mickelch/public_html/stuart/wp-content/plugins/social-autho-bio/social_author_bio.php on line 68
 C-H functionalisation | Interesting Organic Chemistry and Natural Products. | Page 2

I see that the Baran group are synthesising simple molecules again. This week they reported their route to the potent anti-tumour  compounds verruculogen and fumitremorgin A; two alkaloids with lots of rings and an endoperoxide in an eight membered ring. Not to mention a substituent  at the 6 position of the indole ring. 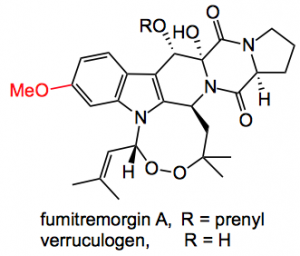 So several challenges in making this molecule. Obviously substitution at the indole 6 position then the endoperoxide next to oxidisable double bonds, and, of course, the rest of the molecule. Tryptophan lends itself as an obvious starting material and indeed that’s where it began.

Thus C-H activation is required: “The implicit challenge of a strategy seeking to modify only the C6−H bond is evident, given the known propensity of indole to react preferentially at C2, C3, and C7. In fact, it could be argued that the C6 position is the most difficult position to directly functionalize on an indole, even when considering electrophilic aromatic substitution and directed ortho-metalation strategies. C−H borylation was selected as the method of choice to solve this problem, given its demonstrated utility on tryptophan systems and recent reports showing ligand control of regioselectivity. Additionally, we postulated that a large blocking group on the indole nitrogen, such as a TIPS group, would be necessary to obtain the desired regioselectivity.“

The formation of the endoperoxide was examined. This proved equally, if not more of a challenge than the selective indole oxidation.

But they were able to isolate some of the intermediates which showed they were getting some part of the way to a product. Eventually they had an intermediate which allowed further conversion:

The structure was confirmed by x-ray. This then allowed the total synthesis of the desired compounds from tryptophan in 12 steps with a reasonable overall yield.

You should get the supplementary information because some experimental details are only present in there. For example the fragment bearing the silylated peroxide used for the Pictet-Spengler. It is a 5 step route and involves cobalt catalysed oxygen addition which goes in 73% yield.

Another interesting step is the following dehydrogenation:

This is done with zirconium tetrachloride in nitrosobenzene in good yield: “To a solution of ester 27 (100 mg, 0.11 mmol) in CH2Cl2 (1 mL) was added nitrosobenzene (30 mg, 0.28 mmol) followed by ZrCl4 (26 mg, 0.11 mmol) at 0 oC. The resulting brown solution was allowed to stir for an additional 3 hours at ambient temperature. The reaction was then quenched with Et3N/MeOH (0.2 mL/0.2 mL) and concentrated in vacuo. The crude residue was purified by silica gel chromatography (10%→40% EtOAc/hexanes) to afford the unsaturated ester (75 mg, 76%) as pale yellow foam (Rf = 0.60; 1:1 EtOAc/hexanes)”, and thus allows the di-hydroxylation with osmium tetroxide.

This synthesis again demonstrates the determination of the people in this group to get things to work, and it is paying off. Yet another success, congratulations.