Warning: count(): Parameter must be an array or an object that implements Countable in /home/mickelch/public_html/stuart/wp-content/plugins/social-autho-bio/social_author_bio.php on line 68
 Stille coupling | Interesting Organic Chemistry and Natural Products.

This week’s is actually from last week, the total synthesis of crotophorbolone from the lab of Inoue in the University of Tokyo. 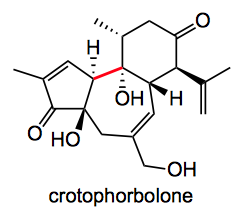 In his own words “The three rings  having five various oxygen-based functionalities, present a daunting synthetic challenge“. But not to be daunted he proceeded with an interesting retro-synthetic analysis which recognised a, if not the, key step as being the formation of the red bond joining the rings.

This analysis resulted in a linear synthesis where the reagent numbering went right through the alphabet and on to “reagent hh)” for the last step. Buried amongst these 34 steps are some very interesting transformations. It’s been sometime since I saw such a synthesis  and it is reminiscent of those JACS communications of Woodward. The ones where there were two structures and about 15 reagents above the arrow. Except in this case each structure is presented for us to puzzle over the transformation.

Several things caught my eye: The first was N-hydroxymethylphthalimide as a source of formaldehyde. Now anyone who has tried to generate formaldehyde will appreciate this reagent. It was used by Inoue in an aldol reaction:

giving the hydroxymethyl ketone in 44% yield. Some Barton photochemistry is involved in the one of the subsequent steps:

I give you the details from the supplementary material “2-mercaptopyridine N-oxide sodium salt (D, 6.2 g, 42 mmol) and DMAP (339 mg, 2.77 mmol) were successively added to a solution of the above crude 14 in toluene (140 mL) at room temperature under argon atmosphere. The reaction mixture was stirred at room temperature for 2 h, and then (SePh)2 (12.9 g, 41.3 mmol) was added. The resultant mixture was irradiated with a medium pressure Hg lump for 1.5 h. After the mixture was concentrated, the resultant residue was purified by flash column chromatography on silica gel (250 g, hexane/EtOAc 10/1) to afford the crude 15, which was used in the next reaction without further purification.” Note the use of a Hg lump here, probably a vital experimental detail.

Moving on: A nice use of Pd chemistry to isomerise double bonds was used-

The di-acetate was then converted to the retrosynthetic intermediate by converting one of the acetates to a chloride and a Stille coupling was done “When… treated with  CuTC, and K2CO3 in the presence of catalytic [Pd(PPh3)4] in DMF, and the stannyl compound the C-C bond formation proceeded, even at 0 °C, to afford the product with no geometrical alteration. Hence, the requisite cis relationship between the radical donor (C-ring) and acceptor (A- ring) was secured at this stage.” All ready for the crucial ring closure.

This was done using a radical reaction: (TMS)3SiH, toluene,  and

at 110 °C, giving 69% yield of the tricyclic compound. This was achieved with complete stereocontrol of the new ring junction. A further 13 steps produced the natural product.

So here is a great paper describing a tremendous total synthesis with lots to learn. The supplementary material is also very detailed, even providing us with the amounts of silica-gel used for each chromatographic step. Something which I would like to see more people adopting.