Warning: count(): Parameter must be an array or an object that implements Countable in /home/mickelch/public_html/stuart/wp-content/plugins/social-autho-bio/social_author_bio.php on line 68
 Energetic Materials | Interesting Organic Chemistry and Natural Products. | Page 2

Benzyne is not a compound used in everyday synthesis but it appeared in this week’s ASAP from the group of Raminelli from the Universidade Federal de Saõ Paulo, Diadema, SP, Brazil. They were interested in synthesising some of the aporphine alkaloids which are biosynthetic derivatives of isoquinoline alkaloids and can be found in several families of plants and have interesting and important pharmacological properties. Exemplified by lysicamine, (±)-nuciferine, (±)-nornuciferine, (±)-zanthoxyphylline iodide, (±)-O-methylisothebaine, and (±)-trimethoxynoraporphine; all having the same core structure differing by the degrees of oxidation around the aromatic rings.

Reterosynthetic analysis reveals that the middle ring can be constructed by a [4+2] cycloaddition of benzyne and the 1-methyleneisoquinoline followed by a H migration:

So some conventional chemistry (not involving some transition metal) gives the isoquinoline in a few steps using a classical Bischler−Napieralski reaction producing the 1-methylisoquinoline in 90% yield.

The last step is done at -50°C with TFAA/pyridine and gives the methylene compound in 70% yield.

from which benzyne can be generated by treatment with caesium fluoride in acetonitrile at 80°C. The cycloaddition goes in 67% yield to give 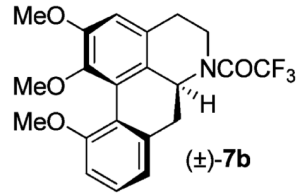 So some nice conventional chemistry here and good results using something as reactive as benzyne. Nice paper.