Warning: count(): Parameter must be an array or an object that implements Countable in /home/mickelch/public_html/stuart/wp-content/plugins/social-autho-bio/social_author_bio.php on line 68
 Thermally challenged reactions | Interesting Organic Chemistry and Natural Products. | Page 3

We are all familiar with the Mitsunobu reaction a wonderful piece of chemistry. Unfortunately it does not fit the bill in terms of  “poor atom economy and the generation of stoichiometric phosphine oxide and hydrazine byproducts that complicate purification” and hence has been “highly under-utilised in process chemistry and manufacturing due to arduous purification from by-products and poor atom economy“. This week’s ASAP seeks to redress these problems. A report from Aldrich at the University of Minnesota presents us with a fully catalytic version of this reaction: By this is meant catalytic in phosphine and catalytic in azocarboxylate. 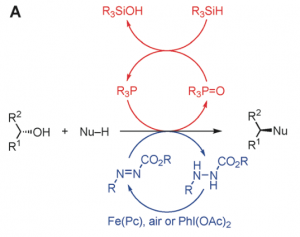 Observent readers will notice that this catalytic cycle has a reduction and an oxidation process present in the same environment. Phosphine oxides are readily reduced back to phosphines by some quite powerful reducing agents, the effectiveness of this reaction and the strength of the reducing agent can be somewhat optimised by careful choice of the phosphine oxide. Aldrich investigated the following reaction:

The optimal conditions found were  1-phenylphospholane 1-oxide used in 5 mol%, the reductant phenylsilane, 1.1 equivalents, 1.1 equivalents of DIAD in THF at 80°C for 18 hours producing a 77% yield of the ester. This is comparable to the non-catalytic system. The system has a reasonable scope with various alcohols being esterified in good yields. Remaining is the catalytic cycle addressing the generation of the diazocarboxylate. For this they chose conditions first found by Taniguchi employing an Fe(II) phthalocyanine and oxygen as the oxidant. This system oxidises hydrazines to produce azocarboxylates in good yield. So using 10 mol% of the Fe catalyst 10 mol% of ethyl 2-(3,4-dichlorophenyl)hydrazine-1-carboxylate and the above mentioned catalytic phosphine generation in “an oxygen-enriched atmosphere with 5Å molecular sieves” gave a yield of 63 %“. So it would seem that the opposing catalytic cycles are compatible with one another.

From the authors “We were able to successfully combine Taniguchi’s approach with our novel catalytic phosphorus methodology. Both the phosphorous catalyst and the catalytic hydrazine can also be recovered easily in greater than 95 % quantities during chromatography. Fe(pc) is nontoxic and inexpensive, and 1-phenylphospholane-1-oxide is synthesized in only two steps without the need for halogenated solvents or carcinogenic butadiene. While there is still room for improvement, the concept of a fully catalytic Mitsunobu reaction has finally been realized. Improvements in yield and reaction setup will turn this concept into a more practical application, but this reaction still fulfills the requirements of a sustainable, safe, and economic Mitsunobu reaction for process chemistry and manufacturing.”

Is this last statement really true? Phenylsilane is a very reactive compound. Just looking at the MSDS makes me cringe, triphenylphosphine is like water compared to this compound. What about its compatibility with other functional groups in your drug synthesis route? I’ll bet it reacts, at least with some of them. Are the phenylsilyloxy reaction products readily separable from the mixture? Well column chromatography is used to obtain the pure products, so it’s in a similar league for ease of removal as triphenylphosphine oxide.

Oxidation and reduction processes are notorious for thermal saftey difficulties. Careful reaction conditions being required in both cases to ensure a safe process. Here they are combined in “one pot” and just to make things easier under an atmosphere of oxygen in boiling THF, an ether well known to provide peroxides. Let’s also not mention Fe(II) in the mixture, a metal known to reduce the onset temperature of thermal problems. Let’s not forget the hydrazines, which are invariably toxic species in catalytic quantities or otherwise. So, once again some DSC data would have been useful in this paper to provide at least an indication of the thermal properties of this catalytic system.

So while this is some very nice chemistry does it fulfil the conditions the authors set out to address: “poor atom economy and the generation of stoichiometric phosphine oxide and hydrazine byproducts that complicate purification” and hence has been “highly under-utilised in process chemistry and manufacturing due to arduous purification from by-products and poor atom economy“. Well I don’t think so, it has missed the target completely. So I’ll be sticking to the normal Mitsunobu conditions for a while yet.