Warning: count(): Parameter must be an array or an object that implements Countable in /home/mickelch/public_html/stuart/wp-content/plugins/social-autho-bio/social_author_bio.php on line 68
 The second job part 2: Chemical development the beginning | Interesting Organic Chemistry and Natural Products.

One of the better antagonists of the original low affinity series was selected for development. It was quite exciting at the time, my first contact with a development compound, it was also my first brush with the people from chemical development, who, I knew were there, but I never really thought about it, until that day when the compound was selected.

As probably every company has we had a standard package which was turned over to these curious people at the other side of the company site, about a 15 minute walk from my lab or 5 minutes with a departmental bicycle (which was an old military reject and had a fixed wheel, no gears and weighed a ton). I set off like one of the Biblical Magi with all the gifts of paperwork and samples, including 1kg of the precious development compound. The person to whom I gave this package to would not accept the kilo sample. He said “I’ll take it but only for lab use”, when asked “why?” he said, “it was not manufactured under cGMP conditions and as such could not be utilised for anything except normal lab work.” Well that deflated my ego a bit, so I left him with 10g, for lab use, and took the rest back. I found out later that this he was in charge of running the GMP storage facility, which explained his reticence in accepting my wondrous gift(s).

A few weeks later I got a call from the chemical developer  who was responsible for the compound, “would I like to have a tour round the pilot plant?” Of course I said yes and got on my heavy bike. My God was I impressed, lots of huge reactors, centrifuges and plastic (not glass) windows with holes in within the safety cells. When I asked why are there holes I was told that it stops the plastic from bursting all over the place in case of an explosion and directs the blast wave towards the outside. Oh! To be seen was lots of piping, valves, control consoles and the like, with the bottom two-thirds of reactors protruding from the ceiling like some kind of monster upside-down mushrooms. One lasting memory was just how clean the whole plant was, you could have eaten your dinner from the floor, very impressive. Little did I know?

On a side note over the coming months the chemist there made several hundred kilos of the precious development compound and then the compound was axed, as they tend to be, and the whole lot was incinerated.

In med. chem. there had been some more re-shuffles and the cardiovascular group was disbanded. So we ended up with another new boss, the previous one had moved on and up to greater things. The new one made a 1,3-shift from the 6th floor to the third floor and was now responsible for nervous system research. Some sort of funny logic there I think, never mind.

Life and chemistry went on until one bright day I found myself in a departmental meeting involved in a “chemical” argument with the boss, never a good thing to have. He was moaning that instead of removing chiral centres in our active series we were putting them in. In retrospect this is probably correct but at the time it lead to more active compounds. Anyway things got quite heated and I left the meeting and phoned the head of chemical development who, in the meantime had become a good friend of mine, and asked him if he had a job for me. Well he said yes, I said yes and a week later I was one of those chemical entities at the other side of the factory site.

I joined a group of 4 other chemists and a group leader. They were all great guys very helpful and got me settled in and started working on changing my chemical outlook. I was given 4 stuffed A4 folders full of information about the pilot plant, SOPs, cGMP and so on, but no project! That changed rather rapidly. A compound was dumped in our group’s lap because the another site did not have the equipment to make the quantities for a phase 2 study, we needed around 2000kgs of the drug substance the day before yesterday. I think it was an eight-step synthesis; three labs were working on this rush project and I was allocated the middle two steps. I remember the person, for whom I would be making the material so he could do his steps (the last three), giving me a piece of paper with exact and I mean exact specifications for the compound I was to deliver to him. I don’t recall them but I remember them being very thorough. I thought how in hell am I going to do this? He needed around 3.5 tons of material for his part of the pilot campaign.

Phone went, group leader on the end. Went to his office and he handed me the laboratory procedure and pilot plant procedures and said do it. Bear in mind that I had been a development chemist for about a week. It was a phenolic alkylation with a 10-fold excess of 1,5-dibromopentane, acetone and sodium carbonate at reflux followed by filtration, product distillation. The second step was also a phenolic alkylation (of the product from the first step), as before, followed by a crystallisation after a solvent change. Sounds easy.

The alkylations were done in a 1000 L reactor, the crystallisation in a 2500 L glass lined reactor. Well the alkylation(s) were no problem went in 99.5% yield. But before the second alkylation could be carried out we had to remove and recover the excess 1,5-dibromopentane which was quite expensive. This was done in a molecular distillation set-up that had three columns and was under high vacuum generated with an oil diffusion pump. Here are 2 pictures for those not familiar with this equipment: 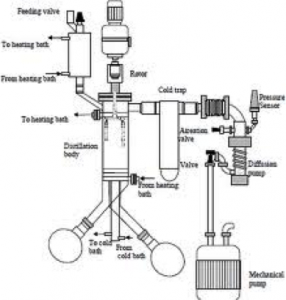 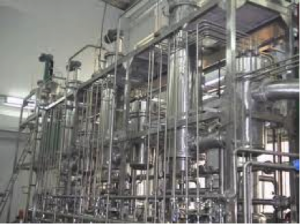 I apologise for the picture quality, but you can see what is meant here. Our distillation bodies were about two meters high and 70cm in diameter, our pump got us down to 10-3mbar. We spent months distilling our 7000 kg of material, to recover the excess 1,5-dibromopentane and eventually get pure product. I forgot to mention that we added carbowax 600 to make the whole mixture less viscous. Actually the distillation was not a problem, it just ran 24 hours a day, 7 days a week. What caused me the biggest headache was the crystallisation of the product from the second alkylation.

I worked it all out in the lab before hand, crystallised nicely from cyclohexane. I don’t remember the quantities but it was done in the 2500 L reactor. So, following my wonderful pilot plant procedure (in which I had remembered to include the anti-static agent), we went to work. It dissolved nicely at reflux; we then had to concentrate it from 2000 L to 1500 L at which point it should have began to crystallise after this the distillation was terminated and the mixture cooled slowly to 10°C. This all went fine and after 500 L distillate had been collected the soup went cloudy, great I thought, and left the plant to have a well deserved coffee. Just sat down, phone goes, “Dr., the suspension has become a solution again, what do we do next?” said a voice. What now? It should be noted here that the pilot plant operators will not do anything without a procedure, as a novice I had the feeling that if I wrote a procedure for blowing their noses, they would follow it to the letter, this, of course, is cGMP at work. Anyway we removed more solvent, no crystallisation, went down to a volume of 1000 L no crystallisation. Obviously the mixture was supersaturated; at least that’s what I told them. Off to the lab, back with one seed crystal, heaved it in at 25°C, the whole mixture solidified instantly! There was a sort of sickly crunching noise as the stirrer stopped. The crunching noise was the sound of the enamel cracking. We eventually added a bit of THF and slowly warmed the mixture up and the solid re-dissolved and transferred it to another reactor.

Now I don’t know if you have seen one of these reactors, there is miles of glass attached to the top of it, not to mention condensers, probes, stirrer motor. The lid is attached to the main body with what seemed like thousands of big nuts and bolts, and the whole lot weighs hundreds of kilos. Needless to say I was not very popular with the pilot plant boss. It took them three weeks to dismantle the reactor replace the stirrer and put the whole lot back together again. But never mind, the good news was that I got my yield, plus a few glass splinters, and the compound met the specs I was set, the glass did not interfere in the next step and was removed by a simple filtration.

So that was my first foray into the magic world of chemical development. There is a lot more to tell but that is for later.