Warning: count(): Parameter must be an array or an object that implements Countable in /home/mickelch/public_html/stuart/wp-content/plugins/social-autho-bio/social_author_bio.php on line 68
 Publication of the week, number 58, 2nd January 2015 | Interesting Organic Chemistry and Natural Products.

This week I spotted a paper from Breit (Institute for Organic Chemistry, in the Albert-Ludwigs-University of Freiburg, Germany) presenting the use of his o-diphenylphosphanyl benzoate (o-DPPB) group in assisting directed C-C bond formation leading to a total synthesis of dictyostatin.

This group allows regio- and stereochemical control of  a rhodium catalysed hydroformylation as well as control of the SN2‘ substitution of allylic o-DPPB esters by carbon nucleophiles with stereo- and regioselectivity allowing syn-1,3-chirality transfer. Having demonstrated the success of this group in polypropionate synthesis they wished to apply it to a more challenging target:- 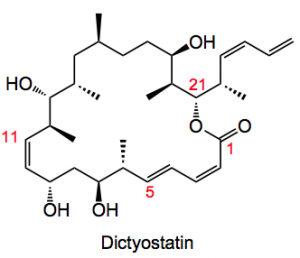 That molecule is certainly a challenge! I won’t go through the entire retero-synthesis but Breit recognised that the C5-C7 and the C12-C14 units could be synthesised by using directed hydroformylation and allylic substitution. This gives the folowing two fragments:-

So now the test of the theory! The o-DPPB allylic ester underwent Cu catalysed allylic addition of the Grignard reagent derived from (S)-4-bromo-3-methylbut-1-ene to give the following:-

in 84% yield with a d.r. of >90:10. A six step sequence then progressed it to the desired dictyostatin fragment. The Weinreb amide underwent Rh catalysed hydroformylation with high yield and good d.r of 88:12 of the next fragment:-

Further elaboration to the dictyostatin fragment was uneventful.

A summary from the authors “Both the o-DPPB-directed hydroformylation and allylic substitution proved to be valuable methods for the construction of propionate motifs. Specifically, the rhodium-catalysed hydroformylation installed the C6 stereocenter of dictyostatin and allowed concomitant introduction of the enyne moiety by Wittig olefination. The allylic substitution reaction introduced the C14 methyl group and allowed further manipulation of the product by Sharpless asymmetric epoxidation. The performance of both methods was convincing with regard to their practicability, selectivity, and scale and gives reason to expect further application in organic synthesis.”.

I would tend to agree with that comment and this group seems to have earned its place in the tool-kit, at least for polypropionate synthesis. Nice piece of work showing a good application of this functional group.

Note: the enyne group referred to I will cover in a future post.