Warning: count(): Parameter must be an array or an object that implements Countable in /home/mickelch/public_html/stuart/wp-content/plugins/social-autho-bio/social_author_bio.php on line 68
 Chemical Development | Interesting Organic Chemistry and Natural Products. | Page 3

I see the group at Eisai are still fiddling with the already wonderful Halaven synthesis. They give us some interesting chemistry this week from the chiral pool.

A difficult part of the current route is an efficient synthesis of the C14-C26 fragment: 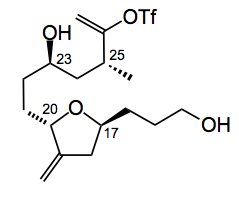 So they looked for an alternative route to this fragment, one in which the stereocenters could be constructed on a rigid template where the intermediates could well be crystalline easing the purification. Re-constructing the above fragment led to the following idea: 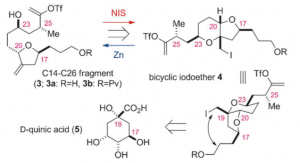 Quinic acid is therefore the source of the chirality for all the stereocenters in the C14-C26 fragment.

From quinic acid it is 6 high yielding steps to the next intermediate, a pyran: 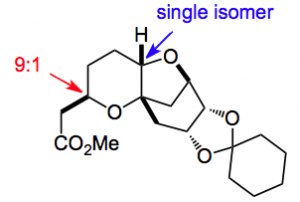 Exactly the result they hoped for! Next was to α methylate the nitrile to give a 1:1 mixture of isomers using LDA as the base. The desired, (R),  compound crystallised “better” than the (S) compound. Selectivity was improved with KHMDS providing a 2:1 selectivity. Epimerisation with catalytic amounts of KHMDS produced a 4:1 mixture which after crystallisation was raised to between 20:1 and 30:1. Recycling of the mother liquors produced more of the desired isomer. From the authors” The results suggested the possibility of a crystallization induced diastereoselective transformation as a method to control the C25 stereogenic center. In the event, treatment of the epimeric mixture d.r. = 1:1.6, (R)(S) as the major diastereomer with a catalytic amount of potassium tert-pentoxide equilibrated and precipitated the (R) isomer with 12:1 d.r.”. Further manipulation gave the desired fragment with all the desired stereocenters set as required in a quality required for inclusion in the Halaven synthesis.

An interesting comparison was made between the current route and the new one in terms of manufacturing efficiency. Although the route with the crystalline intermediates is 7 steps longer, it has a higher overall yield than the current manufacturing process. Also the cost of materials decreased by some 80% as did the amount of waste by a similar amount, just by using crystallisation. Of course this is mainly due to the avoidance of chromatography. A further interesting comment from the authors “A perhaps under appreciated aspect of translating a natural product synthesis to a practical manufacturing process is the importance of crystallization in the design strategy. A classical cyclic stereocontrol approach, although sometimes lengthier, often benefits from a great number of crystalline intermediates”.

A read of the supplementary material is really worthwhile. This is no mg chemistry as you normally find in this journal, but Kg scale. It has EXACT experimental descriptions, temperatures, times, amounts (of everything, even crude material before purification) just as it should be written. It would be great to see this level of detail everywhere as it would be a wonderful aid to those trying to reproduce the chemistry or attempting to do something similar. So another great piece of work by the Eisai team contributing to the success of this special compound.