Warning: count(): Parameter must be an array or an object that implements Countable in /home/mickelch/public_html/stuart/wp-content/plugins/social-autho-bio/social_author_bio.php on line 68
 terpenes | Interesting Organic Chemistry and Natural Products. | Page 2

This week I have chosen a paper by Yamashita, from Tohoku University, Sendai, Japan, describing the total synthesis of Limonin, one of the bitter tasting compounds in citrus fruits: 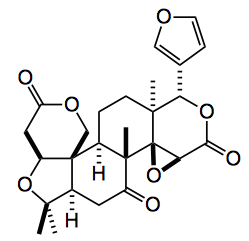 This compound, is not only a pain to draw but is synthesised in 35 steps from geraniol. The paper is packed full of chemistry so I have picked just some of the highlights. Their retro synthesis is 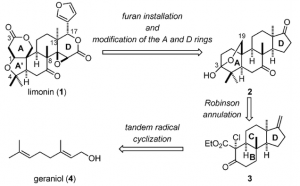 The tricyclic compound was constructed by a manganese-mediated tandem radical cyclisation:

The starting acetylene was obtained in 7 steps and 50% yield from geraniol. The cyclisation was initiated by manganese acetate and went in 68%. The 5:&6 ring junction was produced as a mixture of diastereoisomers (2.1:1) at the quaternary center. Robinson annulation then added the fourth ring. That works as well as it always does!

The next interesting reaction I spotted seemed to be causally dismissed by the authors. This was in the attempts to cleave the exo-cyclic methylene group. It seems that this C=C is sterically challenged and “conventional” oxidation methods to produce a ketone did not work: “For example, treatment of 9 with a stoichiometric amount of OsO4 in the absence of pyridine afforded no reaction. Upon treatment of 9 with a catalytic amount of RuCl3 in the presence of NaIO4, the desired ketone was obtained in 23% yield.” But the C=C does react with m-CPBA to give the epoxide which undergoes opening with NaCN at 120°C and elimination of acetonitrile to give the ketone in about 80% yield! 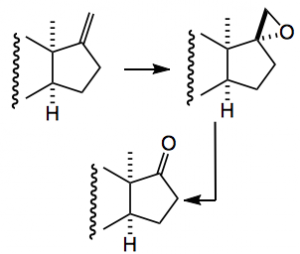 Moving on through, after some functionalisation at the other end; a Saegusa oxidation of the ketone was achieved in 92% yield:

Some nice photochemistry next: 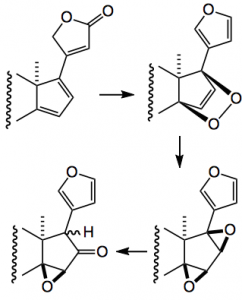 This sequence went in good yield, around 45%. The transformation from the endoperoxide to the diepoxide was done using Noyori’s method. Silica-gel treatment resulted in the hydride shift to give the epoxy ketone.

More photochemistry, this time at the other end of the molecule, a Suárez reaction to make the tetrahydrofuran ring:

This, the authors suggest proceeds “Specifically, treatment  with iodobenzene diacetate and iodine under an oxygen atmosphere with sunlamp irradiation likely caused homolytic cleavage of the C3-C4 bond and subsequent C4 oxidation to generate an alkoxy radical. This radical underwent C1 hydrogen abstraction and iodination followed by formation of a tetrahydrofuran ring to provide the product“.

Finally a deprotection and oxidation gave the natural product. I have obviously not covered everything but I hope its an interesting selection of chemistry. Go read there’s lots more in there.