Warning: count(): Parameter must be an array or an object that implements Countable in /home/mickelch/public_html/stuart/wp-content/plugins/social-autho-bio/social_author_bio.php on line 68
 The second job part 1 | Interesting Organic Chemistry and Natural Products.

Now I will call this the second job, because I suppose that is what it was. In a new country, new/old employers, new bosses etc. So the second job seems appropriate. I was still in the same department running the same chemistry still trying to find more active compounds. Enjoying the life and the company, but inevitably things change. The section leader was promoted up and sideways as a new head of pharma research took over.  So a new broom sweeps clean, so they say and a new section leader was appointed.

At the same time they were getting ready for a big research wide project review in each of the therapeutic areas, so everyone was somewhat nervous. These reviews were conducted with higher management presiding and in the presence of selected consultants, usually biologists. Boy was everyone nervous and stressed out. They spent a lot of time making powerpoint presentations and abstracting everyone’s reports, so that by the time it arrived at the top of the food chain you were lucky to see a few words about your work, never mind a sentence. The great day arrived, our CNS projects were allocated a morning. It was like being back at school where nervous kids and their parents faced the headmaster and staff. Anyway the phosphorus project survived by the skin of it’s teeth thanks to some new results.

Within the area of GABA-b med. chem. and that of the agonists in general, for example Baclofen, substitution at nitrogen was taboo, it tended to cause your biological activity to vanish. So I thought I’d try it in our phosphorus antagonist series. Well I made a N-benzyl derivative of one of them and look what happened: 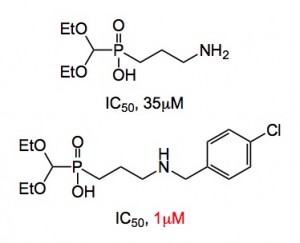 Well I didn’t believe it, but a repeat of the synthesis and re-test gave the same result. So off we went through the compounds and made similar substations, optimising as we went and ended up with a sub-nanomolar binding in one series, and they were orally available! Unfortunately the same was not true in the agonist series.

We then turned our attention to designing ligands that we could use to isolate and characterise the receptor. examined were many possibilities and eventually we settled on a photo affinity ligand. So the elusive receptor was fished and the amino acid sequence published. Recently I became aware of x-ray studies of the role my compounds play in the activation and mechanism of this receptor. A fitting end to this part of the story and nice to see that what we had started all those years ago comes to such an interesting “conclusion”.