Warning: count(): Parameter must be an array or an object that implements Countable in /home/mickelch/public_html/stuart/wp-content/plugins/social-autho-bio/social_author_bio.php on line 68
 Bryostatin 1 and analogues | Interesting Organic Chemistry and Natural Products.

The Wender group have published two papers discussing their latest results in the search for simplified bryostatin 1 analogues. The requirement for simpler analogues can be seen by considering the structure of bryostatin 1: 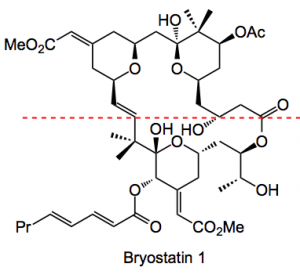 As one can see it is quite a complicated molecule. Total synthesis cannot really provide the material required for clinical studies as the route would have around 40 or more steps (not including chromatography). Natural sources are also ruled out as it is produced in minute quantities by the marine organism, 18g from 14 tons and that in a GMP isolation!! 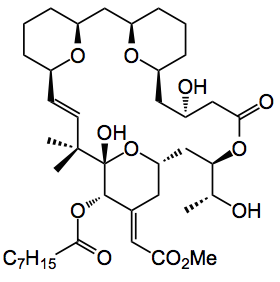 Building on this and years of intervening research Paul and his group have “-performed extensive computer- guided comparisons of the spatial orientation of heteroatoms (hydrogen bond donors and acceptors) of then known PKC ligands, resulting in a proposed pharmacophore and the first designed PKC modulators. For bryostatin, this analysis suggested that the key structural elements that govern binding were present in its southern half, termed the “recognition domain,” that is proposed to contact and thus be “recognised” by PKC. The role of the northern portion of the molecule, the “spacer domain” (see Figure 1), was proposed to control the conformation of the recognition domain and potentially influence PKC translocation and membrane association. It follows that compounds containing simpler spacer domains that preserve the conformation of the recognition domain should elicit PKC affinities comparable to bryostatin.“

Utilising computer studies and the results from functional-orientated synthesis (FOS) they identified simpler analogues for the spacer domain. One such spacer was a salicylate group. These have the advantage of being readily available and easy to functionalise. One compound that emerged is the following: 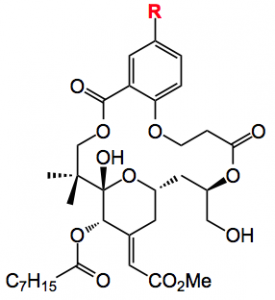 So the hydrogen bond donor of the ketal will interact with the ether and the aromatic ring would be expected to be in the correct position for membrane association. An overlap of the x-ray structure of bryostatin 1 with the lowest conformation of the salicylate give an excellent positional agreement: 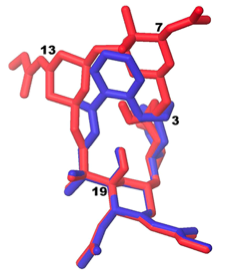 After a more difficult than anticipated synthesis the salicylate was obtained in 27 steps and lowish yield and it proved to be a potent ligand for PKC, with a Ki of 18 nM compared to that of bryostatin 1 of 1.1 nM. So here is an excellent example of the possible simplification that can be achieved: Loss of 6 stereocenters, a ring, a di- and tri-substituted olefin not to mention the two quaternary centers. This represents a significant degree of simplification.

Now I drew the structure above with an R group. In the initial compound this was H. In the second of the publications the SAR of the R group was investigated. Now if you make the compound with R = Br you have a wonderful handle for functional group transformation.

Using a modified Suzuki reaction a whole range of substituents were introduced into this position. Of note here is that only boronic acids were effective and a degree of thermal lability limited the reaction to 60°C for about 2 hours. So a library of salicylate derivatives was reported , in summary from the authors, “The library resulting from standard Suzuki coupling conditions with C7′-Br analog demonstrated that a variety of functionalities are tolerated by this approach while still producing highly potent (<10 nM) analogs. Electron-rich or -poor arenes as well as lipophilic or hydrophobic moieties (at least when avoiding hydrogen bond donors) were all tolerated, a valuable trait when tuning ADME properties for clinical needs. Interestingly, several of these agents displayed modest selectivity profiles between PKCδ and PKCβI which could reveal distinct trends when moving to more advanced biological evaluations of these compounds. Efforts to assess the therapeutic potential of this library toward Alzheimer’s disease, HIV eradication, and other high priority indications are underway and will be reported in due course. It is clear from these studies that readily tunable analogs comparable in potency to the natural product can be accessed in significantly fewer steps than that required to access the natural product. This FOS strategy thus provides an alternative to the “all or nothing” efforts to achieve clinical relevancy based on the use of the natural product alone.“

So we have here another excellent piece of scientific detective work which will hopefully culminate in one or more clinical candidate to address the pressing medical needs of today’s world. I congratulate Paul and all his co-workers who have contributed over the years to this super project.